100 years ago, Jack Kerouac was born 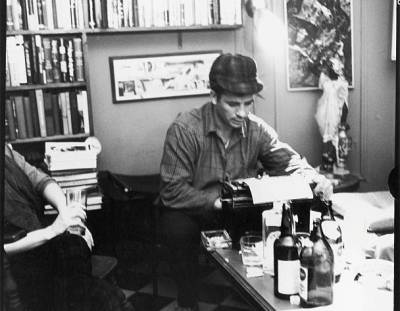 Credit: Jack Kerouac in front of his typewriting machine; Gettyimages

The Father of the Beat Generation

One century ago, Jack Kerouac was born to live, travel, love, suffer, write and elucidate our minds with his intense rhythmical prose. To put each word in its special place like bricks on the bridge between the East and West, between people and people. The incurable wanderer, the believer, the one who will burn, who will flare up to illuminate happiness, sorrow, life, death, everything. He who transformed himself into books and words, which are now, many years later, still circulating the minds of the readers around the world. Thank you, Jack!

Enjoy several excerpts from his books.

Some words by Kerouac

1. "[...]the only people for me are the mad ones, the ones who are mad to live, mad to talk, mad to be saved, desirous of everything at the same time, the ones who never yawn or say a commonplace thing, but burn, burn, burn like fabulous yellow roman candles exploding like spiders across the stars and in the middle you see the blue centerlight pop and everybody goes "Awww!"

2. "One day I will find the right words, and they will be simple."

3. "My fault, my failure, is not in the passions I have, but in my lack of control of them."

5. "The best teacher is experience and not through someone's distorted point of view"

6. "I have lots of things to teach you now, in case we ever meet, concerning the message that was transmitted to me under a pine tree in North Carolina on a cold winter moonlit night. It said that Nothing Ever Happened, so don't worry. It's all like a dream. Everything is ecstasy, inside. We just don't know it because of our thinking-minds. But in our true blissful essence of mind is known that everything is alright forever and forever and forever. Close your eyes, let your hands and nerve-ends drop, stop breathing for 3 seconds, listen to the silence inside the illusion of the world, and you will remember the lesson you forgot, which was taught in immense milky way soft cloud innumerable worlds long ago and not even at all. It is all one vast awakened thing. I call it the golden eternity. It is perfect. We were never really born, we will never really die. It has nothing to do with the imaginary idea of a personal self, other selves, many selves everywhere: Self is only an idea, a mortal idea. That which passes into everything is one thing. It's a dream already ended. There's nothing to be afraid of and nothing to be glad about. I know this from staring at mountains months on end. They never show any expression, they are like empty space. Do you think the emptiness of space will ever crumble away? Mountains will crumble, but the emptiness of space, which is the one universal essence of mind, the vast awakenerhood, empty and awake, will never crumble away because it was never born."

Thoughts to reflect on: Tolstoy
Oolite Arts’ Home + Away Residency at Anderson Ran...