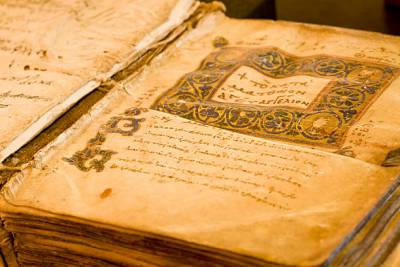 'The way you write, the way I write, is very person-specific,' Prof Popović said. 'It is your muscle movements and it is very individual.'

'The beauty of the technology we have now is that you can make high spectral images and go down to the pixel level, and then make all sorts of calculations which you can boil down to movement,' Prof Popović said. 'Through their handwriting, we can, as it were, shake hands with them.'

Researchers spent many long hours painstakingly tracing Hebrew letters to teach a computer model what was ink and what was not. The results were 3D models of manuscript texts that include more than 5 000 dimensions of calculations.

Back in a lab in the Netherlands, Maruf Dhali, one of the team members, was puzzled by the results the computer model was producing.

It showed that, roughly halfway through the text of the Isaiah scroll, the handwriting changed enough to indicate another scribe took over. While statistically significant, it was barely perceptible visually.

The researchers considered other options. Could he have changed his pen? Or had he perhaps stopped writing and picked up again much later?

'They write so alike, but the most likely explanation really is that there are two different scribes,' said Prof Popović. 'One scribe is so good at imitating the other that, with the naked human eye, you can't really see that.'

While scholars had previously debated whether or not there were multiple writers of the Isaiah scroll, this was the first robust evidence that two scribes had produced it.

Could the AI be wrong? Less likely, according to Prof Popović.

'The human palaeographer, the expert, is much more of a black box,' he said. 'We don't really know what goes on in our minds. Of course, we have this expertise, but we cannot explain all of our palaeographic reasoning.'

By using a trained computer, he says, palaeographers are challenged to better explain the observations they make with human eyes.

The ability to drill down to the handwriting of individual scribes and connect them with various works opens up a whole new way for researchers to look at texts, as well as understand their scribal culture.

For instance, there is evidence that some Dead Sea Scroll scribes were just learning how to write. A scribe was discovered who wrote both Hebrew manuscripts and Aramaic (an ancient language which was the lingua franca of the Middle East 2-3 000 years ago) ones, giving researchers new insights into their language abilities.

'Another example is how we look at those scribes - is there also some individuality or space for them to manoeuvre?' said Prof Popović. 'We see there is variation there, so they were not just slavish robots copying what they were told to copy.'

With this palaeographic approach, these scrolls even act like a sort of time machine.

'We can see a little part of what was the cultural evolution that became the Bible,' he said. 'It's the same sort of scribal culture. The way they write here was also how they worked two to three centuries before.'

But the texts also gave the team a chance to better understand the lives of Roman Egyptians and how their identity mixed with Roman culture of the time.

'Multiculturalism and multilingualism are key words of our reality,' said Prof Scappaticcio. 'It was actually almost the same thinking about antiquity, with the necessary caveat due to the chronologic distance.'

Researchers found texts of the Aeneid, the Latin epic verse penned by Virgil glorifying the foundation of Rome, being used in local language instruction.

'In the peripheral areas of the Empire, Latin was the language of power,' she said. 'Rome imposed its power, and literature was one of the instruments through which to do that.'

Through their research, her team was even able to uncover the first text showing Arabic transliterated as Latin, as well a literary work by Seneca the Elder (father of the better known Roman philosopher by the same name) thought to have been completely lost.

The team has assembled an exceptional number of texts in this new study. 'In 2023, we will publish a corpus of roughly 1 500 Latin texts on papyri,' Prof Scappaticcio said.

A previous collection, from 1958, contained a mere 300 texts. The goal is to allow a broader range of scholars to access Latin works written and circulating from the fringes of the Roman Empire.

'I hope it will be a point of departure, using this corpus as a tool to investigate Roman orientalism,' she said. 'It was an open society and a lot of aspects flowed from one culture to another. It was not so much different from today.'