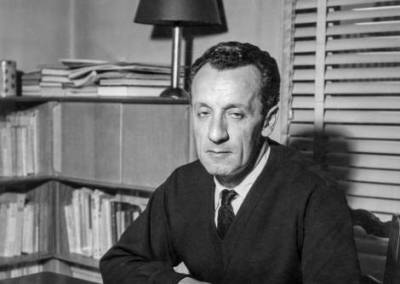 Credit: The philosopher Maurice Merleau-Ponty in his home in Paris 1950; Getty Images

Maurice Merleau-Ponty (1908-1961) was a French phenomenologist philosopher and a leading figure in existentialism. He was born in Rochefort-sur-Mer, France and died in Paris, France. He studied at the École Normale Supérieure and later taught at the Sorbonne, the University of Lyon, and the Collège de France. Merleau-Ponty is best known for his work in phenomenology, which emphasizes the role of perception and embodiment in understanding the world. His major works include "Phenomenology of Perception" (1945) and "The Structure of Behavior" (1942). He died at the age of 53 in a road accident.

Excerpts from Phenomenology of Perception (1962)

1. "The perception of other people and the intersubjective world is problematic only for adults. The child lives in a world which he unhesitatingly believes accessible to all around him. He has no awares of himself or of others as private subjectives, nor does he suspect that all of us, himself included, are limited to one certain point of view of the world. That is why he subjects neither his thoughts, in which he believes as they present themselves, to any sort of criticism. He has no knowledge of points of view. For him men are empty heads turned towards one single, self-evident world where everything takes place, even dreams, which are, he thinks, in his room, and even thinking, since it is not distinct from words."

4. "The full meaning of a language is never translatable into another. We may speak several languages but one of them always remains the one in which we live. In order completely to assimilate a language it would be necessary to make the world which it expresses one's own and one never does belong to two worlds at once."

5. "It is no more natural and no less conventional to shout in anger or to kiss in love than to call a table 'a table'. Feelings and passional conduct are invented like words. Even those which like paternity seem to be part and parcel of the human make-up are in reality institutions. It is impossible to superimpose on man a lower layer of behavior which one chooses to call 'natural' followed by a manufactured cultural or spiritual world. Everything is both manufactured and natural in man as it were in the sense that there is not a word, not a form of behavior which does not owe something to purely biological being and which at the same time does not elude the simplicity of animal life and cause forms of vital behavior to deviate from their pre-ordained direction through a sort of leakage and through a genius for ambiguity which might serve to define man."

6. "I am a psychological and historical structure. Along with existence, I received a way of existing, or a style. All of my actions and thoughts are related to this structure, and even a philosopher's thought is merely a way of making explicit his hold upon the world, which is all he is. And Yet, I am free, not in spite of or beneath these motivations, but rather by their means. For that meaningful life, that particular signification of nature and history that I am, does not restrict my access to the world; it is rather my means of communication with it"

7. "The thing can never be separated from someone who perceives it; nor can it ever actually be in itself because its articulations are the very ones of our existence, and because it is posited at the end of a gaze or at the conclusion of a sensory exploration that invests it with humanity. To taking up or the achievement by us of an alien intention or inversely the accomplishment beyond our perceptual powers and as a coupling of our body with the things."

Researchers cook up a new way to remove microplast...
From mussels to meadows, the sea offers big lesson...