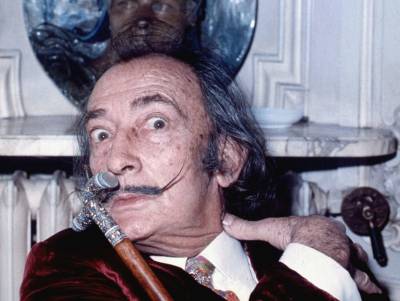 Credit: Portrait of Dalí by Allan Warren, 1972; via Wikipedia

Salvador Dali's 'The Persistence of Memory'

It is certainly not necessary to be an art historian to know the name of Salvador Dali. Arguably, the most popular painter of 20th-century side by side with Picasso, though it was to a large extent because of his constant self-promoting. However, by no doubt, Dali was a meticulous master of the brush and an artist with unique and alluring imagination. The topics of his pictures were always as provocative – death, sex, decay, excrement, dreams, irrationality – as was his personality. He was often and is still criticized for his self-centered, ego-maniacal obsessions, and parading. Dali was all the time surrounded by deliberate scandals, he loved giving shocking interviews, quibbling, and arguing about what was considered piquant topics at the moment. For example, he would say that is fascinated by the personality of Adolf Hitler or that he (Dali) is a monarchist. He was often speaking about himself in the third person, a habit usually associated with Roman emperors, or maybe he was pretending to be so special that he is a stranger even to himself. Maybe, in a way, he was. We cannot be sure what was true and what was just part of his farce.

Commonly, the reception of Salvador Dali's art was divided into two radically opposed groups. One is that of the people who adored his surreal imagery combined with a realistic style, and the other of those who despise his personality and cannot take his pictures separately. Notwithstanding this natural division of the critics, one thing is sure – Salvador Dali was a great mind and painter that not only explored some of the most complex and obscured parts of human consciousness but he revolutionized the world of art and changed the way we perceive reality.

Exhibition Sessions at IXth SWS International Scientific Conferences on Social Sciences and Arts & Humanities
Social Sciences & Arts (SSA)
Credit: Gettyimages The union of ART and Science We welcome you to demonstrate your artwork, exhibit your models or other products, to perform your act. Our firm belief is that specialists from various areas should join in the mutual endeavor to make...
110 Hits
Read More