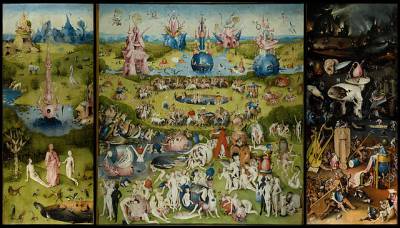 Credit: The Garden of Earthly Delights in the Museo del Prado in Madrid, c. 1495–1505, attributed to Bosch; via Wikipedia

The Garden of Earthly Delights

We could use tons of words to describe the work of Hieronymus Bosch but that won't be enough. His pictures are so full of various figures, allegories, and metaphors, more of which could be deciphered only through the imagination of the medieval mind. On the other hand, visual art is traditionally hard to be transcribed into words and is often ineffable. That is especially the case when we are talking about his most famous triptych – The Garden of Earthly Delights  (c.1503-1515) – that represents heaven, earth, and hell. Its obvious connections with Biblical texts give us some ideas about the possible meaning but that is definitely a small part of the massive scenes represented in the picture and fails to elucidate the surrealistic imagery and hallucinatory-like visions populating it.

The Garden of Earthly Delights Explained

Many art historians have tried to give a full explanation of the Garden, but each one is more like a glimpse into the universe of Bosch fantasy. Below you can enjoy the three parts of the meticulous approach taken by James Payne - curator, gallerist, and passionate art lover. He sticks to the classical humanistic method of interpreting, which is maybe the most valuable one in that case because it tries to reconstruct the medieval perception of the world.

Waste not, want watts – turning waste into energy
Google engineer claims that one of the company’s p...