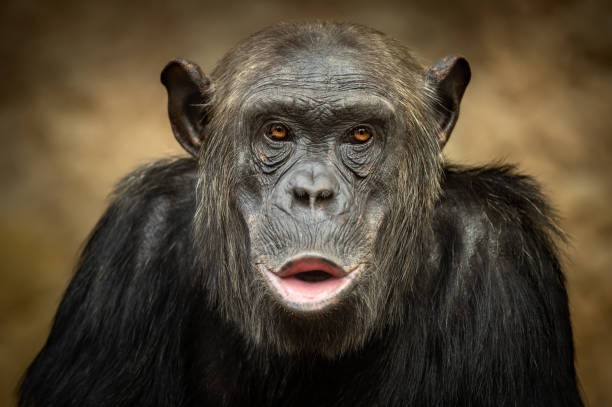 'The traditional view is that, even though great apes are our closest living relatives, they are not useful for studying how language and speech came about, because their vocal behaviour is so different,' said primatologist Dr Adriano Lameira at the University of Warwick, UK. 'It's automatic and reflexive, guided by blind instinct.'

During his years spent in jungles studying orangutans in the wild, Lameria discovered that the range and novelty of vocal sounds in wild orangutans varies, and he recently reported that this depends on local population density. Novelty is at a premium when an individual needs to stand out, so that apes living in areas of high population density express their individuality through more distinctive and variable vocal sounds.

In Indonesia, Lameira experimented by crawling around the forest floor on all fours, disguised with a tiger-patterned sheet. Recording the responses of the forest apes, he discovered that orangutan mums holding an infant stay silent when they spot "a tiger", which stayed within sight for two minutes. They suppress alert calls for up to 20 minutes after the tiger has gone.

From there, he reasoned that immediate vocalisation could endanger the young orangutan. 'A Sumatran tiger can climb 10 metres up a tree in a second,' said Lameira. 'If you advertise your location, especially if you have an infant, it could be very dangerous.'

By vocalising after the tiger has moved on, the mother alerts the infant to the danger. This helps the juvenile to make the correct association. The remarkable thing about this is that the orangutan was communicating about a past event, rather than something in the here and now. 'This was completely outside the box of what we had been thinking,' said Lameira.

It opens up the possibility that orangutans communicate about past events, or perhaps even future events. If this ability exists, the possibilities for sharing information are endless. 'This could well be a trait that was shared by our last common ancestor – this capacity of communicating about events that are not in the here and now.'

It may be that other apes are also able to do this to some degree. 'Even if you communicate only about 20 minutes in the past, or future, you can accrue benefits,' said Lameira. 'Natural selection just needs a little bit of something to tinker with and improve upon.' Perhaps apes can communicate that a certain tree has such-and-such fruit, though this suggestion remains speculative.

In the south of France, Dr Pascal Belin studies captive macaque and marmoset monkeys to investigate their perception of vocalisations.

'The goal of the research is to better understand the way the human brain evolved,' said Belin, a neuroscientist at the Aix-Marseille University in France. 'We study humans and three other types of primates – marmosets, macaques and baboons – to try to better understand differences and similarities, especially in vocal communications.'

In one experiment, three macaques were trained to stay still in an MRI machine, which scanned their brains as they listened to dozens of sounds, including vocalisations from other macaques.

'Like in the human brain, the macaques and marmosets seem to have regions that are particularly sensitive to conspecific (from the same species) vocalisations,' said Belin. The MRI scans show which areas become active as the macaques listen to other macaques, but not natural or other sounds or marmosets. A very similar area is active when humans listen to human voices.

If the same area of the brain in macaques and humans lights up when they hear another member of their species, this points to this voice area having evolved before they diverged in the evolutionary tree.

Belin's hypothesis is that the voice information processing part of the primate brain is quite similar and therefore evolved in a common ancestor, before ancient humans such as Homo erectus emerged in Africa 2-3 million years ago.

'It would suggest that the last common ancestor of humans and macaques already had a precursor of this voice area in the brain 20 million years ago,' said Belin.

Future experiments are planned to use surgically implanted electrodes in the monkeys to try to distinguish exactly which neurons become active when the macaques hear another macaque, but not other monkeys or other sounds or noises.

It may even be possible to then compare results from marmosets and macaques to humans, fitted with these electrodes for medical reasons. These are implanted in some epileptic patients, who don't respond to treatments, to allow neurosurgeons to better see small areas of the brain that they may need to remove.

Such patients could be asked to listen to the same 96 sounds as the marmosets and macaques while being monitored in hospital, to study the brain's response.

Yet it is not only the similarities that are interesting, but differences too. Great apes can make vowel-like sounds, as do monkeys, with their voice box. Yet only great apes and humans seem to make consonant-like sounds, which rely less on the vocal tract and more on the lips.

Orangutans have a rich repertoire of lip-smacking clicks and raspberries, which they combine with grunts and other vowel-like sounds. 'They combine voiced calls with voiceless calls, so like vowel-like with consonant-like sounds,' said Lameira. 'We think there is something quite unique about this marriage between two distinct types of call, so powerful that every language was built on this formula of consonant plus vowel.'

This repertoire comprised critical starter blocks for our ancestors to begin developing what we today would recognise as human speech and language, Lameira suspects. Such shared traits, in Lameira's view, is one way to trace back the path of human speech and language evolution and understand key steps forward that our ancestors took in terms of vocalisations and brain evolution.

He calls on scientists studying gorillas, bonobos and chimpanzees to similarly look for shared traits, such as combinations of some consonant-like and vowel-like sounds, or evidence of communications about recent past events. By investigating our primate relatives, we may uncover vestiges of ancestral humans and the origins of our speech and language of today.

Lost for words – the devastation caused by aphasia