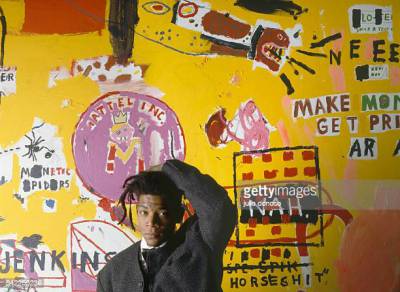 Credit: American artist, musician and producer of Haitian and Puerto Rican origins Jean-Michel Basquiat, in front of one of his paintings, during an exhibition at the Yvon Lambert gallery. (Photo by julio donoso/Sygma via Getty Images)

The art of Basquiat

New York in the '80s was a turbulent artistic city. A period when many new underground contra-cultures were emerging – graffiti, rap, punk, metal, Neo-expressionism, gender, and racism awareness. It was one more time a place where many painters, writers, filmmakers, and artists would expand their creativity and enter the world of Art.

Out of nowhere, a black painter came onto the scene - Jean-Michel Basquiat. Although he lived in a progressive and rather free-minded society, rich in extravagance and peculiarities, he would face many prejudices, just because of the color of his skin. However, Jean-Michel would make his way through. From a poor graffiti artist and poet, he would become the artist with one of the most expensive paintings ever purchased – 110.5 million dollars. He lived only 27 years. Nevertheless his short career – only 7 years – he produced more than 2000 pieces of art. A talented prodigy, Basquiat is regarded as one of the most influential and recognized – unfortunately, after his death – black artists that ever lived.

Which one is the hometown of Psychoanalysis?
Volcano's special 'voice' is key to understanding ...