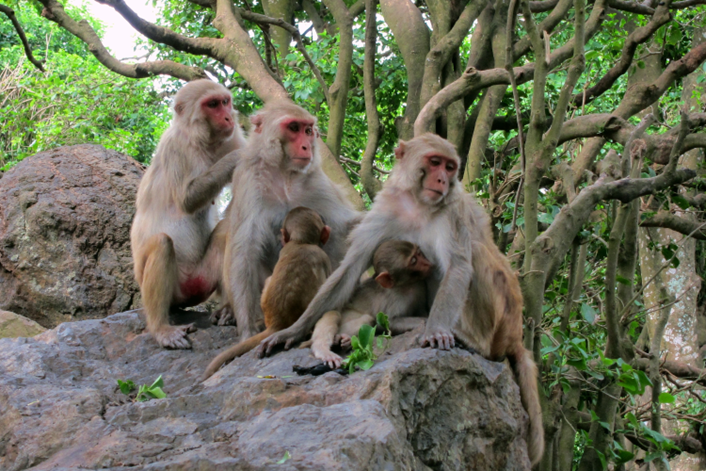 "For the first time, we're able to relate the complexity of social lives of a group of living primates with brain structure," says Camille Testard of the University of Pennsylvania, lead author of the paper.

Previous research on human social networks has hinted at this relationship, says co-author Michael Platt, also of the University of Pennsylvania. "The literature ties variation in the size of the amygdala to the number of Facebook friends you have. But it's hard to get data on human social interactions because we can't follow people around all day."

With the rhesus macaques living on Cayo Santiago, an island off the coast of Puerto Rico, however, it's a different story. Platt and colleagues have studied this group of free-ranging nonhuman primates for more than a decade. Part of their research has focused on grooming partners, which represent direct and important relationships for the macaques, and on looking at the animals' broader social networks ­­-- the individuals they interact with indirectly.

After Hurricane Maria hit the island, the researchers examined whether the macaques grew or shrank their social networks in the face of more limited resources. Testard led the analysis for that study, which found that the animals became more social and more accepting of one another, forming new relationships in addition to those they already had.

Though these findings relate specifically to free-ranging rhesus macaques, they have possible implications for human behavior, such as understanding neurodevelopmental disorders like autism, according to Platt.

Such connections, however, are still in the distance. For now, the team is moving ahead with additional research studying Cayo Santiago's population of macaques, looking at facets like whether a natural disaster such as Hurricane Maria affects the animals' brain structures and how social connectedness influences long-term survival.