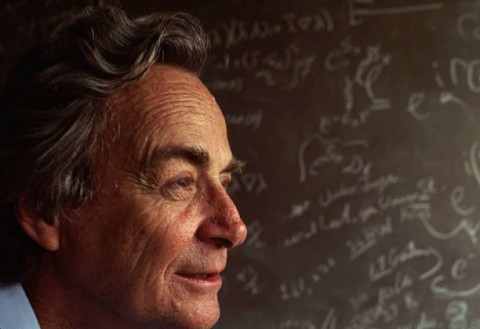 Credit: Nobel Prize winning physicist Richard Feynman stands in front of a blackboard strewn with notation in his lab in Los Angeles, Californina. (Photo by Kevin Fleming/Corbis via Getty Images)

Excerpts from Feynman's book - QED: The Strange Theory of Light and Matter (1985)

1. "We cannot predict whether a given photon will arrive at A or B. All we can predict is that out of 100 photons that come down, an average of 4 will be reflected by the front surface. Does this mean that physics, a science of great exactitude, has been reduced to calculating only the probability of an event, and not predicting exactly what will happen? Yes. That's a retreat, but that's the way it is: Nature permits us to calculate only probabilities. Yet science has not collapsed."

2. "With quantum physics, who needs drugs?"