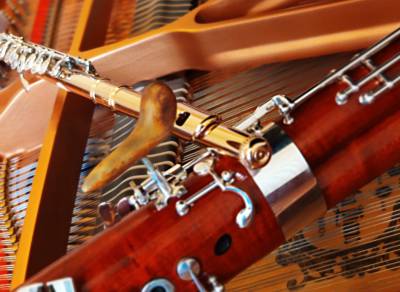 As part of the 2022 edition's live performances, we are glad to present you with The 3 x F trio. It is an instrumental ensemble: flute - Aldona Ślusarz, bassoon - Marcin Szreter and piano - Anna Czaicka-Jaklewicz. The extremely various sounds of the instruments and the wide range of the articulation and tone possibilities give as a result an interesting, expressive, and harmonious connection at the same time. The trio will immerse you in a classical journey throughout some of the most delicate and elevating pieces of classical music.

The repertoire for the concert

The Bassoon Concerto e minor R 484 is one of Antonio Vivaldi's most recognizable. It is in the usual three movements:

I. Allegro poco - the orchestra and soloist alternate as was the usual practice of the ritornello form that Vivaldi used. The theme is developed and changed in the dialogue between the soloist and orchestra.

II. Andante - a serious introduction is given by the strings. When the bassoon enters the mood is softened as the bassoon sings mellow music. The short movement ends with the strings.

III. Allegro - Vivaldi returns to the quick music style of the first movement. The string orchestra part leads the bassoon to some rapid music and difficult figurations.

This melodic, tonal work is written with simple harmonies in standard notation. Free sections which highlight the dialogue between piano and flute alternate with more traditional melody and accompaniment sections. The melismatic flute writing is reminiscent of Glick's activities as a cantor.

It was composed in 1819 while Weber was serving as music director in Dresden. In four movements, the first, Allegro moderato, is more moderato than allegro and has an air of melancholy and contemplation. Next comes a short, martial Scherzo. The third movement, The Shepherd's Lament, is in the tradition of the French Air Pastorale, evocative of a rustic scene with a lonely shepherd, playing a song-like ballad on his flute. The finale, also an Allegro, displays Weber's gift for melody and invention.

Dr. Ryszard Sojka). In 2006 she completed her post-graduate studies at the Academy of Music in

She has performed in recitals in Germany, France, Great Britain, Switzerland, Czech Republic, Slovakia, Italy as well as in many towns in Poland.

She is a laureate of the competitions in Great Britain, Germany, Belgium, France, Switzerland.

She has recorded CD albums including music for flute and piano. In recognition of her achievements in the field of music, she has been awarded scholarships from the Minister of Culture and Art, the Hugo Kołłątaj Foundation, and the Government of Switzerland.

Born on 8th June 1982 in Kraków. She is a graduate of the Karol Szymanowski Academy of Music in Katowice, Prof Wojciech Świtała's piano class, and Prof Regina Michalak's chamber music class. She works currently as a teacher at the Academy of Music in Katowice. She developed her pianistic skills with great masters like: Lee Kum-Sing (Vancouver), Alexei Orlovetsky, Wiktor Mierżanow (Moscow), Grzegorz Kurzyński (Wrocław), Aleksiej Maksymow (Donieck), Anthony Spiri (Cologne), Tomasz Herbut (Bern), Kevin Kenner (London). She collaborated with many distinguished artists such as Radovan Vlatković and Jennifer Montone. During her education, she participated in many national and international competitions and festivals in Poland and Europe.

She has recorded three-chamber and solo-chamber music albums for the DUX label: