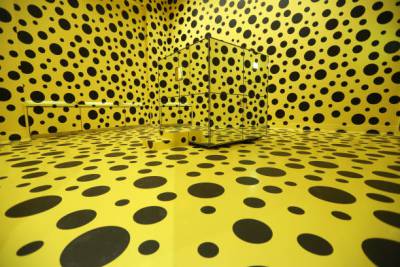 Credit: The installation "The Spirits of the Pumpkins Descended Into the Heavens" by Yayoi Kusama; Getty Images

The most famous Japanese avant-garde artist

Yayoi Kusama is a Japanese artist known for her avant-garde work in a variety of media, including painting, sculpture, performance art, and installation art. Born in 1929 in Matsumoto City, Japan, Kusama began creating art at a young age and moved to New York City in 1958 to pursue her career. She quickly became a prominent figure in the art world, known for her use of polka dots and repetitive patterns. In 1973, she returned to Japan and was diagnosed with obsessive-compulsive disorder, which has greatly influenced her art. Kusama's work has been featured in numerous solo and group exhibitions around the world and is held in the collections of major museums worldwide.

The most distinctive features of Yayoi Kusama's art are her use of polka dots and repetitive patterns, her use of vibrant and often contrasting colors, and her exploration of themes of infinity, the subconscious, and the relationship between the self and the universe. Her Infinity Mirror Rooms, which are immersive, multi-reflective environments filled with lights, are also a signature feature of her work. Kusama's art also often deals with mental health and self-expression, as she has been open about her struggle with obsessive-compulsive disorder and her use of art as a form of therapy.

Below you can enjoy a short video made by James Payne about her art and life.