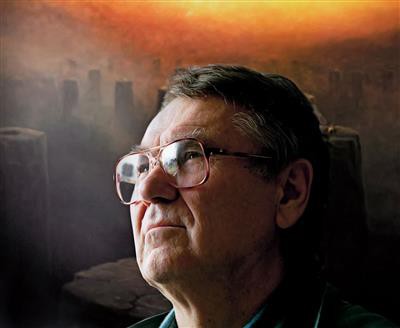 When referring to dark, nightmarish artists, people often cite Giger, or Francis Bacon (the painter), and their alternative macabre perception of the world. The first with his frustrating fusion of body and machine, and the latter, with the permeating anxiety of his blurry expressionistic figures caught in their existential dreadful scream. Truly, two scary examples of fine art. However, today we are going to focus on one artist, which is maybe less known but certainly, he completes the atmosphere of horrifying artistic beauty - Zdzisław Beksiński (24 February 1929 – 21 February 2005). He was a Polish painter, photographer, and sculptor. He is mainly known for his dystopian surrealistic imagery of death, decay, fleshy skeletons, bleak deserts, apocalyptic architecture, and synthesis of bodies and objects. Although his pictures are depressing and dark, they evoke a state of contemplation and thoughts about the nature of life and how do we use our time on the planet, what is our attitude to each other. Critics are often seduced by the idea to interpret his art as a reflection of the turbulent ages that he lived in. However, Beksiński remained unrelenting in his conviction that his paintings don't need any words to dismantle their meaning. Furthermore, he even abstained from giving his pieces any title. They are rather dreamlike visions for visual perception and meditation.

Below you could take a look and decide for yourselves.

For more of Zdzisław Beksiński paintings you could follow this link.

Thoughts to reflect on: Borges
How scientists are ‘looking’ inside asteroids