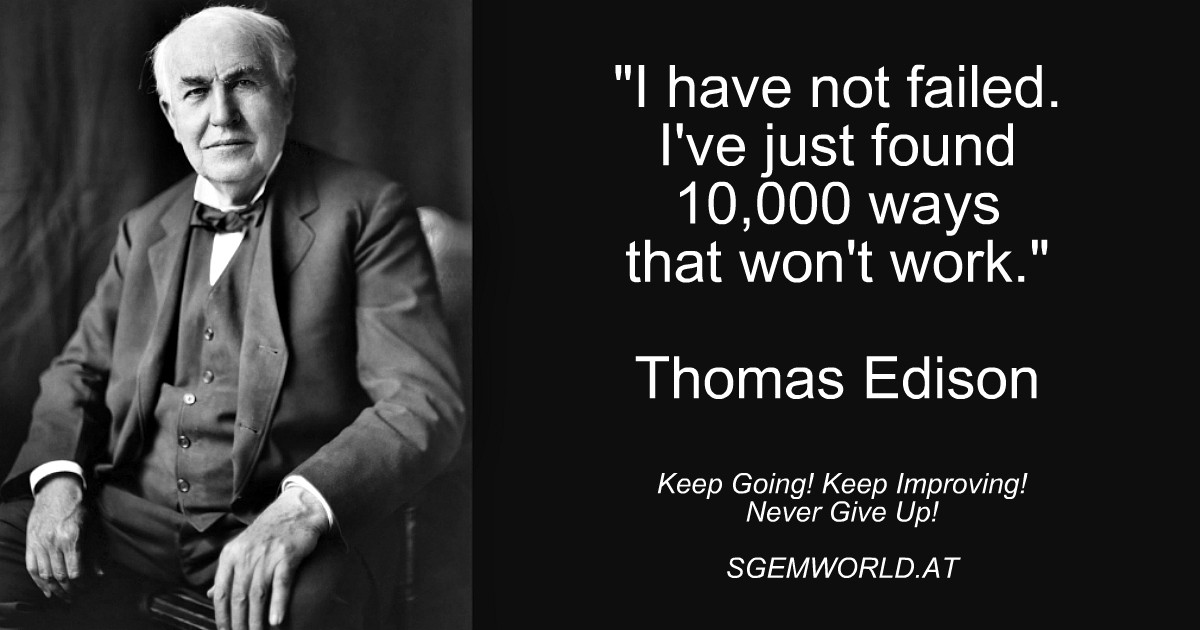 THOMAS EDISON: AN INOVATOR AND... A MOTIVATOR

Thomas Edison, America's greatest investor as they call him, left us  1093 U.S. patents and 2,332 patents worldwide. He was the father of some of the most important inventions that changes our life completely - the authomatic telegraph (a more development version of Samuel Morse's invention), the carbon telephone transmitter, the light bulb, the phonograph, the movie camera and viewer, the alkaline storage car battery...

And not only this! Thomas Edison was one of the first inventors who worked with teams of researchers and employees, founded the first industrial laboratory for research and development, and thus laid the foundations of organized science.

Here are the four guiding principles that marked his life and work, according to Edison Innovation Foundation:

"Throughout his life, Edison operated on four simple principles, taught to him by his loving mother:

1. Never get discouraged if you fail. Learn from it. Keep trying.
2. Learn with both your head and hands.
3. Not everything of value in life comes from books-experience the world.
4. Never stop learning. Read the entire panorama of literature."

We hope that the following quotes by Thomas Edison will lift you up, the way that did with us. Because sometimes all you need to remember is that the darkest hour is just before dawn. Keep going, friends!

2. "Our greatest weakness lies in giving up. The most certain way to succeed is always to try just one more time."

3. "Just because something doesn't do what you planned it to do doesn't mean it's useless."

4. "To invent, you need a good imagination and a pile of junk."

5. "There is no substitute for hard work."

6. "Opportunity is missed by most people because it is dressed in overalls and looks like work."

7. "Genius is one percent inspiration and ninety-nine percent perspiration."

8. "Many of life's failures are people who did not realize how close they were to success when they gave up."

9. "Nearly every man who develops an idea works it up to the point where it looks impossible, and then he gets discouraged. That's not the place to become discouraged."

10. "The three great essentials to achieve anything worth while are: Hard work, Stick-to-itiveness, and Common sense."

Share with us your best motivational quote. Help us inspire...

#TeamTrees or How to Plant 7 Million Trees in a Ye...
Is It Really Too Late to Stop Climate Change? Here...

Is math discovered or invented?

What does Science say about military conflicts