What does the film director say 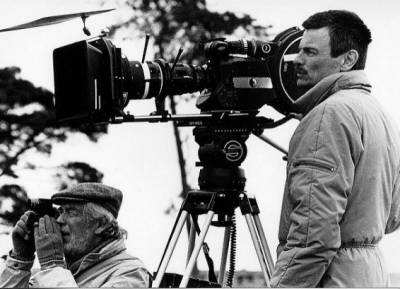 The poetic genius of cinema

Andrei Arsenyevich Tarkovsky (4 April 1932 – 29 December 1986) was a Russian film director, screenwriter, and film theorist. He is widely considered one of the greatest and most influential filmmakers of all time. Tarkovsky's works fathomed the depths of the human soul and are distinctive with their poetic style. His films are known for their exploration of spiritual and metaphysical themes and are noted for their slow pacing and long takes, dreamlike visual imagery, and absorption with nature, consciousness, and memory.

Under the guidance of the filmmaker Mikhail Romm, Tarkovsky studied film at Moscow's VGIK. He has produced only seven full-length feature movies but, they are all regarded as masterpieces. These are Ivan's Childhood (1962), Andrei Rublev (1966), Solaris (1972), Mirror (1975), Stalker (1979), Nostalghia (1983), and The Sacrifice (1986). After years of creative conflict with soviet film authorities, Tarkovsky left the country in 1979 and made his final two films respectively in Italy and Sweden. In 1986, he published a book about cinema and art entitled Sculpting in Time. Sadly, he died of cancer later that year, only 54 years old.

Below you can take a look at the poetic beauty and philosophical depths of his thought.

1. "A man writes because he is tormented, because he doubts. He needs to constantly prove to himself and the others that he's worth something. And if I know for sure that I'm a genius? Why write then? What the hell for?"

2. "I know only one thing. when i sleep, i know no fear, no, trouble no bliss. blessing on him who invented sleep. the common coin that purchases all things, the balance that levels shepherd and king, fool and wise man. there is only one bad thing about sound sleep. they say it closely resembles death."


3. "We can express our feelings regarding the world around us either by poetic or by descriptive means. I prefer to express myself metaphorically. Let me stress: metaphorically, not symbolically. A symbol contains within itself a definite meaning, certain intellectual formula, while metaphor is an image. An image possessing the same distinguishing features as the world it represents. An image — as opposed to a symbol — is indefinite in meaning. One cannot speak of the infinite world by applying tools that are definite and finite. We can analyse the formula that constitutes a symbol, while metaphor is a being-within-itself, it's a monomial. It falls apart at any attempt of touching it."

5. "Let everything that's been planned come true. Let them believe. And let them have a laugh at their passions. Because what they call passion actually is not some emotional energy, but just the friction between their souls and the outside world. And most important, let them believe in themselves. Let them be helpless like children, because weakness is a great thing, and strength is nothing. When a man is just born, he is weak and flexible. When he dies, he is hard and insensitive. When a tree is growing, it's tender and pliant. But when it's dry and hard, it dies. Hardness and strength are death's companions. Pliancy and weakness are expressions of the freshness of being. Because what has hardened will never win."


6. "Some sort of pressure must exist; the artist exists because the world is not perfect. Art would be useless if the world were perfect, as man wouldn't look for harmony but would simply live in it. Art is born out of an ill-designed world."

8 Inspirational Thoughts by some of the Greatest S...
New batteries could share a unique bond with milk ...

Thoughts to reflect on: Ingmar Bergman