Artemis 1 will launch to the Moon today 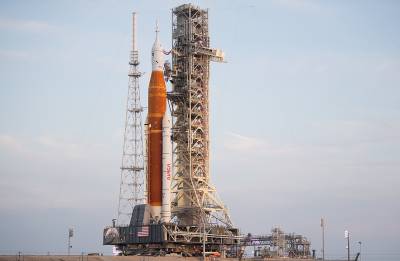 Credit: NASA's Space Launch System (SLS) rocket with the Orion spacecraft aboard is seen atop the mobile launcher as it is rolled up the ramp at Launch Pad 39B, Wednesday, Aug. 17, 2022, at NASA's Kennedy Space Center in Florida; photo by NASA/Joel Kowsky

NASA is preparing for the first integrated test mission of its deep space exploration systems today – 29.08.2022. The name of the mission is Artemis 1 and is the first of a series of planned launches, which hope to achieve the first manned landing on the surface of the Moon since 1972's Apollo 17. Artemis 1 is going to be an uncrewed flight test with mannequins. The main objective is to test the heating shield systems, NASA's next-generation spacesuits, and radiation levels. If the mission is successful, Artemis 2 will take four astronauts near the moon in 2024. After that, Artemis 3 will take a crewed spacecraft for a moon landing. Finally, Artemis 4 will fly to a space station near the moon. NASA aspires that the Artemis expedition will enable a crewed trip to Mars in the following years.

The Test
The rocket comprises the top-notch Orion spacecraft, designed for the needs of future deep-space explorations, and the new-generation Space Launch System - the most powerful rocket in the world, designed to send humans to deep space. The spacecraft is meant to travel more than 450,000 km in total. It will orbit around the Moon with the closest distance of 96 km to its surface, and then head back to the Earth. The greatest challenge will be the moment when Orion hit the Earth's atmosphere with the approximate speed of 40,000km/h, which will produce heating of the corpus of more than 3,000 degrees Celsius. Eleven parachutes are provided to slow down the module to the speed of 30km/h and land it in the ocean on the 10th of October.
The Perspectives

The first and main objective of the mission is to test all the systems and gain enough data on the conditions for a possible crew on board. For that reason, three mannequins will be present on Artemis 1 named Commander Moonikin Campos, Helga, and Zohar. They will be equipped with many sensors and systems in order to examine the levels of radiation in outer space (Orion will go further in space than any spacecraft before) as well as the levels of heat when entering Earth's atmosphere and many more.

Another intriguing perspective is that of eventually building a station on the Moon with a permanent human presence. That could be the first step toward a sustained human presence in space and the starting point for future missions to Mars. The prospect of such a base on the Moon already teased the appetite of the main Space Powers in the world. The phrase "the most valuable real estate" has immediately entered the media rhetorics that revolve around the mission. If the mission is a success, it will push forward the need for a revision of the international space law. Soon enough we will see.

For more detailed information about Artemis 1 and the live video of the launch, you can go to NASA's website.