Astronomers confront a massive black hole at the heart of the Milky Way, Sagittarius A* 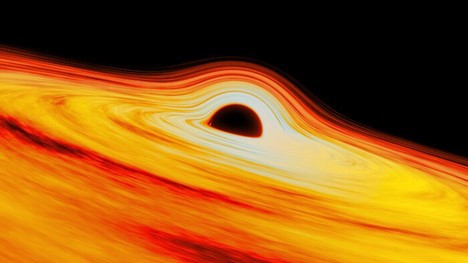 Study finds mass at the center of the Milky Way is 99.9% from Sagittarius A*

At the center of the Milky Way is a supermassive black hole 4.3 million times bigger than the sun known as Sagittarius A*. Until recently, it was not clear how much of the matter at the heart of the galaxy was Sagittarius A*. Astronomers measured the velocities of four distant stars around the black hole. The movement of the stars indicates the mass at the galaxy's center is composed almost entirely of matter from Sagittarius A*, leaving little room for stars, other black holes, interstellar dust and gas, or dark matter.

"The Gemini observatories continue to deliver new insights into the nature of our galaxy and the enormous black hole at its center," said Martin Still, Gemini program officer at the U.S. National Science Foundation. "Further instrument development during the next decade intended for broad use will maintain Gemini's leadership in the characterization of the universe around us."

The team conducted the research at Gemini North in Hawaii, part of the international Gemini Observatory, a program of NOIRLab funded by NSF. The survey involved using spectroscopy from the Gemini Near-Infrared Spectrograph to measure the velocity of the stars and the SINFONI instrument on the European Southern Observatory's Very Large Telescope Interferometer to map the movement of the stars. Using the data from their observations, the team inferred that Sagittarius A* contains 99.9% of the mass at the galactic center.

The next step for astronomers is to learn what remains hidden in the center of the Milky Way. What fills the space that Sagittarius A* hasn't claimed for itself? More will be revealed when astronomers measure fainter, more distant stars with even greater precision.