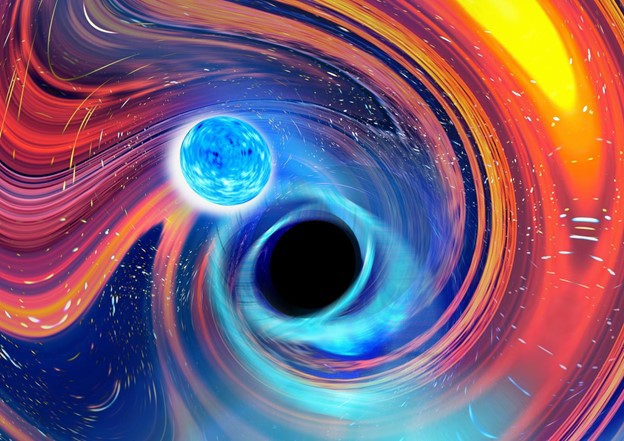 A long time ago, in two galaxies about 900 million light-years away, two black holes each gobbled up their neutron star companions, triggering gravitational waves that finally hit Earth in January 2020.

Discovered by an international team of astrophysicists including Northwestern University researchers, two events -- detected just 10 days apart -- mark the first-ever detection of a black hole merging with a neutron star. The findings will enable researchers to draw the first conclusions about the origins of these rare binary systems and how often they merge.

"Gravitational waves have allowed us to detect collisions of pairs of black holes and pairs of neutron stars, but the mixed collision of a black hole with a neutron star has been the elusive missing piece of the family picture of compact object mergers," said Chase Kimball, who co-authored the study. "With these detections, we finally have measurements of the merger rates across all three categories of compact binary mergers."

The U.S. National Science Foundation-funded research is published in Astrophysical Journal Letters. The team includes researchers from the LIGO Scientific Collaboration, or LSC, the Virgo Collaboration and the Kamioka Gravitational Wave Detector project. An LSC member, Kimball led calculations of the merger rate estimates and how they fit into predictions from the various formation channels of neutron stars and black holes.

Because the two events are the first confident observations of gravitational waves from black holes merging with neutron stars, the researchers now can estimate how often such events happen in the universe. Although not all these events are detectable, the scientists expect that roughly one such merger per month happens within a distance of one billion light-years.

The team is currently preparing for the next observation run, to begin in summer 2022.

Inspirational Quotes
As the poet says

Ozone may be heating the planet more than we realize