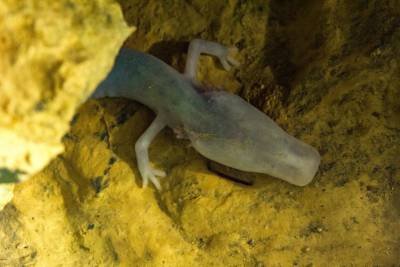 In watery underground caverns, there are creatures that live in eternal midnight. Over the course of generations, these animals have adapted to their isolated and unique environments, and scientists believe their pasty skin and blind eyes may hold secrets to evolution –– and to genetic adaptations that could cast light on longevity, surviving starvation, and eye diseases in humans.

'These caves are isolated worlds,' said Professor Peter Trontelj, a zoologist at the University of Ljubljana in Slovenia. 'If you go a couple of metres (below the surface), you enter a new world with totally different ecological conditions.'

Certain animals are able to adapt to these dark habitats where no plants grow, and lightless caves, like those found in Slovenia, are natural laboratories of evolutionary biology.

Trontelj heads up the GENEVOLCAV project, which is investigating the European olm. These rare cave salamanders resemble small ghostly swimming snakes with four spindly legs and a crocodile's snout. Long ago, ancestors of the olm lived above ground, but once in these caves, they underwent dramatic physical changes to cope with their new environment. The olm is not the only creature able to evolve in this way.

Historically, evolutionary biologists thought that if we were to go back in time and replay the timeline of evolution, we could just as likely take different evolutionary paths and the world and creatures in it would look completely different. But caves show us that this is not the case. Animals' adaptations to light- and nutrient-poor environments, like underground caves, are 'usually quite predictable', said Trontelj. 'We now know that every time it will go the same way.'

Trontelj and his colleagues have shown that this is true within European olms, which are found in central and South-Eastern Europe. GENEVOLCAV has overturned our understanding of these rare cave salamanders. Instead of just one species, as was previously thought, they have discovered nine potentially different species of olm, each of which evolved similar characteristics independently in the eternal watery dark.

While all have the same bleached skin, sightless eyes, and elongated snouts, these species descended from different individual ancestors which found their ways into these midnight caves. 'Everything happened independently, but in a more or less parallel way,' said Trontelj.

The project aims to assemble the olm genome, which is about 16 times larger than the human genome, and identify the genetic changes that have allowed olms to adapt to their unique environments.

'The (physical) changes are the same or very similar, but the question is: 'Are they caused by the same genes (and) are they the same mutations?" Trontelj asked. To answer these questions, he and colleagues cave dive into the dark recesses underground, sometimes descending into pits 400 metres deep, to measure olms and swab their skins to collect DNA. They will need hundreds of samples to investigate these questions, which could have important implications for human medicine.

'There are several traits of (olms) that are interesting from a wider perspective,' said Trontelj. These milky amphibians can live for more than hundreds of years, 10 times longer than their surface-based ancestors, and are able to survive years of starvation. In the dark, olms also lose their colour and go blind. 'It's already known that this pigment loss and eye degeneration in cave fishes can be caused by several different genes, some of which are linked,' he said. Scientists have also linked this group of genes to 'some pathological states in human eye degeneration and albinism'

'Understanding these mechanisms that happen in a predictable way might also help our understanding of some degenerative diseases in humans,' he said.

But olms, which are now only able to survive in these niche habitats, are vulnerable. 'These caves and subterranean waters are quite endangered, and sometimes even very threatened by pollution,' said Trontelj. 'If we don't describe the new species, if they don't have names, they will not receive the conservation attention that a fully-fledged species might.'

The same holds true for the worms, crustaceans and sometimes even fish that inhabit the dark recesses of the Earth. 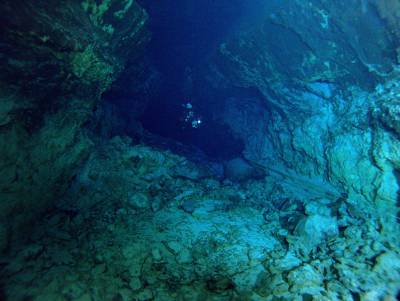 Alejandro Martínez, lead on the ANCAVE project, is working to create a database of such creatures. His database, which already has more than 330 000 entries, draws on all references to underground cave fauna published in scientific literature in every written language.

It is called the "Stygofauna Mundi" database, in reference to a book by naturalist Lazare Botosaneanu, who pioneered the study of these subterranean creatures. 'We are working on making all of this information publicly available,' Martínez said.

Of that database, about 10% of entries are animals that particularly interest Martínez: those that live in coastal aquifers, also known as anchialine environments. What makes these underground caverns special is that their water is salty, fed through underground cracks and fissures by the nearby ocean, with a mix of freshwater seeping in from above. These environments are found all over the world, including in the Canary Islands where Martínez grew up.

And the animals in them are unique. 'Many of those animals are exclusive to this type of habitat, they are not found elsewhere,' said Martínez. They look "weird" and somehow "primitive", he said. 'They resemble things that we know from the fossil record, but which are now extinct.'

Others share ancestors with animals in the ocean, but their seclusion in the caverns mean they cannot interbreed, and this allows scientists to compare cave-dwellers with their kin in the sunshine.

'(Some) are similar to other animals found in the deep ocean nowadays,' he said. 'They are genetically close to each other, but morphologically (physically), they are very different… By comparing these types of species across the world, we can try to better understand how animals change shape to adapt to a new environment.'

He has added species to the database himself, and as part of the ANCAVE project has sampled about 50 caves in the Mediterranean, the Caribbean, and several Atlantic oceanic archipelagos. In these caverns, he gauged the relative abundance of animals within them, captured some and then described them morphologically and genetically.

However, the database is just the first step. 'We can see the generalities that happen across all these lineages,' he explained. 'We can get rid of these confounding effects of phylogeny (how a species or group evolves) and understand morphological change.'

By documenting the breadth of biodiversity in the midnight caves underground, scientists can illuminate the nature of evolution and how animals change.

But Martinez also recognises that the database and research into the subterranean world will only raise more questions. In fact, that is why he keeps returning to these dark watery caverns.