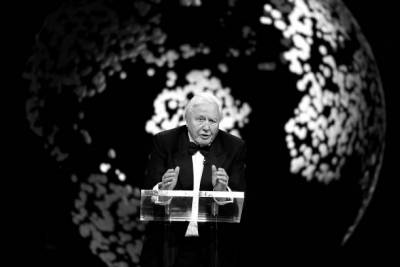 A Life on Our Planet: My Witness Statement and a Vision for the Future (2020)

1. "We came all this way to explore the Moon, and the most important thing is that we discovered the Earth.' We had all simultaneously realised that our home was not limitless – there was an edge to our existence."


2. "For life to truly thrive on this planet, there must be immense biodiversity. Only when billions of different individual organisms make the most of every resource and opportunity they encounter, and millions of species lead lives that interlock so that they sustain each other, can the planet run efficiently. The greater the biodiversity, the more secure will be all life on Earth, including ourselves. Yet the way we humans are now living on Earth is sending biodiversity into a decline."

3. "If the forest transition in the tropics runs its course, the loss of carbon to the air and species to the history books would be catastrophic for the whole world. We must halt all deforestation across the world now and, with our investment and trade, support those nations who have not yet chopped down their forests to reap the benefits of these resources without losing them. That is easier said than done. Preserving wild lands is a very different prospect to preserving wild seas. The high seas are owned by no one. Domestic waters are owned by nations with governments able to make broad decisions on merit. Land, on the other hand, is where we live. It is portioned into billions of different-sized plots, owned, bought and sold by a host of different commercial, state, community and private parties. Its value is decided by markets. The heart of the problem is that, today, there is no way of calculating the value of the wilderness and environmental services, both global and local, that it provides. One hundred hectares of standing rainforest has less value on paper than an oil palm plantation. Tearing down wilderness is therefore seen as worthwhile. The only practical way to change this situation is to change the meaning of value."

4. "As the trees died, their bodies fell into the swamps and accumulated underwater, being slowly entombed by sediment brought down by the rivers. Beyond the reach of oxygen and the normal processes of decomposition, their carbon-laden tissues, buried beneath mud and sand, were compressed and eventually became coal. Subsequently, over several hundred million years, plankton and algae that flourished in ancient seas and stagnant lakes have, on occasions, been buried at depth and turned into oil and inflammable gas."

The world ocean is losing its memory under global ...
The sound of the Cosmos