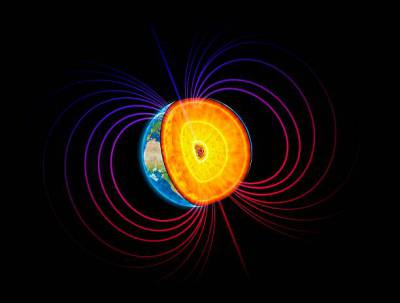 Approximately 1,800 miles beneath our feet, swirling liquid iron in the Earth's outer core generates the planet's protective magnetic field. The magnetic field is invisible but is vital for life on Earth's surface because it shields the planet from the solar wind—streams of radiation from the sun.

About 565 million years ago, however, the magnetic field's strength decreased, to a level of only 10% of the strength it has today. Then, mysteriously, the field bounced back, regaining its strength just before the explosion of multicellular life on Earth.

What caused the magnetic field to bounce back?

According to U.S. National Science Foundation-supported research by scientists at the University of Rochester, the rejuvenation happened within a few tens of millions of years—rapid on geological timescales—and coincided with the formation of Earth's solid inner core, suggesting that the core is likely a direct cause.

The researchers determined several key dates in the inner core's history, including a more precise estimate for its age. The research provides clues about the history and future evolution of Earth and how it became a habitable planet, as well as the evolution of other planets in the solar system.

"This study adds to our understanding of the Earth's magnetic field and inner core, which helps us better comprehend the evolution of planets and life in the past and present," says Eva Zanzerkia, a program director in NSF's Division of Earth Sciences.

To better define the age and growth of the inner core, Tarduno and his team used a carbon dioxide laser and the lab's superconducting quantum interference device magnetometer to analyze feldspar crystals from the rock anorthosite. These crystals have minute magnetic needles within them that are "perfect magnetic recorders," Tarduno says.

A better understanding of the dynamics and growth of the inner core and the magnetic field has important implications, not only in uncovering Earth's past and predicting its future but in unraveling the ways in which other planets might form magnetic shields and sustain the conditions necessary to harbor life.

Researchers believe that Mars, for example, once had a magnetic field, but the field dissipated, leaving the planet vulnerable to solar wind and the surface oceanless. While it is unclear whether the absence of a magnetic field would have caused Earth to meet the same fate, "Earth certainly would've lost much more water if Earth's magnetic field had not been regenerated," Tarduno says. "The planet would be much drier and very different than the planet today."

In terms of planetary evolution, then, the research emphasizes the importance of a magnetic shield and a mechanism to sustain it, he says.

"This research really highlights the need to have something like a growing inner core that sustains a magnetic field over the entire lifetime—many billions of years—of a planet."

Tone as important as truth to counter vaccine fake...
Thoughts to reflect on