Ocean life may adapt to climate change, but with hidden costs 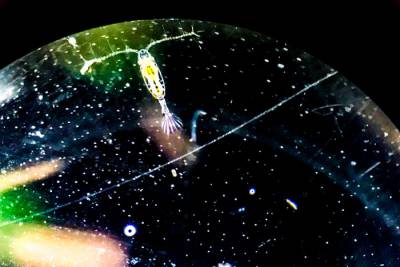 Suppose scientists could watch 20 generations of whales or sharks adapt to climate change, measure how they evolve and how their biology changes as temperatures and carbon dioxide levels rise. That could tell researchers a lot about how resilient life in the oceans might be to a warmer world. But it would also take hundreds of years -- not very useful to ecologists or policymakers trying to understand our warming world today.

Instead, consider the life of the copepod Acartia tonsa, a tiny and humble sea creature near the bottom of the ocean food web. The copepod reproduces, matures, and creates a new generation in about 20 days. It takes about one year for 20 copepod generations to pass.

Copepods and Adaptation of Ocean Life

A team of scientists, led by Melissa Pespeni and Reid Brennan of the University of Vermont and Hans Dam of the University of Connecticut, exposed thousands of copepods to the high temperatures and high carbon dioxide levels predicted for the future of the oceans. Then they watched as 20 generations passed.

The scientists took some of the copepods and returned them to baseline conditions -- the temperature and carbon dioxide levels of the oceans today. They kept watching as three more generations passed.

The U.S. National Science Foundation-supported study, published in Nature Communications, shows that there is hope, Pespeni says. But also complexity in how life responds to climate change.

"Studies that combine ecology and evolution are giving us clues to how marine ecosystems will respond to a changing ocean in the short- and longer-term," says Cynthia Suchman, a program director in NSF's Division of Ocean Sciences.

Pespeni's hope comes from the team's observation that the copepods did not die in the climate change conditions. Instead, they persisted and even thrived. The scientists recorded changes in the copepods' genes related to how they manage heat stress, grow their skeletons in more acidic waters, produce energy, and other cellular processes that are affected by climate change.

The complexity -- "it's a caution, really," Pespeni says -- comes from the observation of what happened to the copepods that were returned to baseline conditions. They revealed the hidden cost of the earlier 20 generations of adaptation. The flexibility that helped the copepods evolve over twenty generations -- what scientists call "phenotypic plasticity" -- was eroded when they tried to return to what had been benign conditions.

The copepods were able, after three generations, to re-evolve back to their ancestral conditions. But they had lost the ability to tolerate limited food supplies and showed reduced resilience to other new forms of stress.

The results show that these creatures have the capacity in their genetic makeup to adapt over 20 generations, evolving to maintain their fitness in a radically changed environment.