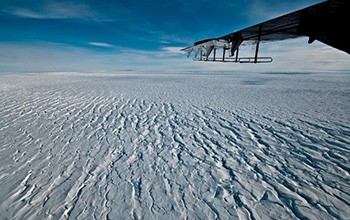 Pine Island Glacier ends in an ice shelf that floats in the Amundsen Sea. Credit: Ian Joughin/University of Washington

For decades, the ice shelf helping to hold back one of the fastest-moving glaciers in Antarctica, Pine Island Glacier, has gradually thinned. Analysis of satellite images reveals a more dramatic process in recent years. From 2017 to 2020, large icebergs at the ice shelf's edge broke off, and the glacier sped up.

For decades, the ice shelf helping to hold back one of the fastest-moving glaciers in Antarctica, Pine Island Glacier, has gradually thinned. Analysis of satellite images reveals a more dramatic process in recent years. From 2017 to 2020, large icebergs at the ice shelf's edge broke off, and the glacier sped up.

Since floating ice shelves help to hold back the larger grounded mass of a glacier, the recent speedup due to a weakening edge could shorten the timeline for Pine Island Glacier's eventual collapse into the sea. The U.S. National Science Foundation-funded study by researchers at the University of Washington and British Antarctic Survey was published in the journal Science Advances.

"We may not have the luxury of waiting for slow changes on Pine Island; things could actually go much quicker than expected," said lead author Ian Joughin, a glaciologist at the Applied Physics Laboratory of the University of Washington. "The processes we'd been studying in this region were leading to an irreversible collapse, but at a fairly measured pace. Things could be much more abrupt if we lose the rest of the ice shelf."

Pine Island Glacier contains approximately 180 trillion tons of ice -- equivalent to 0.5 meters, or 1.6 feet, of global sea level rise. It is already one of the primary sources of Antarctica's contribution to sea-level rise, causing about one-sixth of a millimeter of sea-level rise each year, or about two-thirds of an inch per century, a rate that is expected to increase. If it and neighboring Thwaites Glacier speed up their flow into the ocean and release their hold on the larger West Antarctic Ice Sheet, global seas could rise by several feet over the next few centuries.

The glaciers have attracted attention in recent decades as their ice shelves thinned; warmer ocean currents melted the ice's underside. From the 1990s to 2009, Pine Island Glacier's motion toward the sea accelerated from 2.5 kilometers per year to 4 kilometers per year, or 1.5 miles per year to 2.5 miles per year. The glacier's speed then stabilized at that higher rate for almost a decade.

Results show that what has happened more recently is a different process, related to internal forces on the glacier.

"The ice shelf appears to be ripping apart due to the glacier's acceleration in the past decade or two," Joughin said.

Pine Island's ice shelf is important because it is helping to hold back the relatively unstable West Antarctic glacier, the way the curved buttresses on Notre Dame cathedral hold up the cathedral's mass. Once those buttresses are removed, the slow-moving glacier can flow more quickly to the ocean, contributing to rising seas.

"What is particularly striking about the recent disintegration of Pine Island Glacier is that it is taking place against a backdrop of several millennia of relative stability," says Paul Cutler, a program director in NSF's Office of Polar Programs. "The international research community is very focused on what these new developments mean for future sea level."

What does the poet say?
N2O – Where Science meets Fun