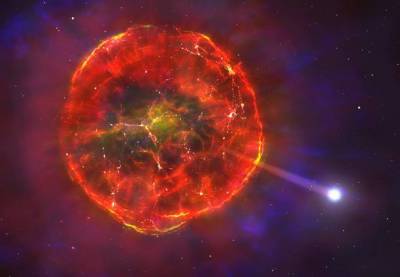 Telescope, one of the two identical telescopes that make up the International Gemini Observatory, astronomers believe they have identified the remnant material of the explosion of a first-generation star. Using an innovative method to deduce the chemical elements contained in the clouds surrounding the quasar. They noticed a highly unusual composition — the material contained over 10 times more iron than magnesium compared to the ratio of these elements found in the sun.

During their research, the astronomers studied results from a prior observation taken by the 8.1-meter Gemini North Telescope using the Gemini Near-Infrared Spectrograph. A spectrograph splits the light emitted by celestial objects into its constituent wavelengths, which carry information about which elements the objects contain. Gemini is one of the few telescopes of its size with suitable equipment to perform such observations.

Two co-authors of the analysis, Yuzuru Yoshii and Hiroaki Sameshima of the University of Tokyo, have developed a method of estimating the abundance of the elements, enabling them to discover the conspicuously low magnesium-to-iron ratio.

If this is indeed evidence of one of the first stars, the discovery will help explain how matter in the universe evolved into what it is today, including in humans. To test this interpretation more thoroughly, many more observations are required to see if other objects have similar characteristics.

Astronomers might be able to find the chemical signatures of long-gone supernova explosions still imprinted on objects in the universe.

"We now know what to look for, we have a pathway," said co-author Timothy Beers, an astronomer at the University of Notre Dame.

The art of the Japanese print-master Hokusai
Infinite conversation

Sharpest image to date of the universe's most massive known star