Volcano's special 'voice' is key to understanding the linguistics of volcanoes 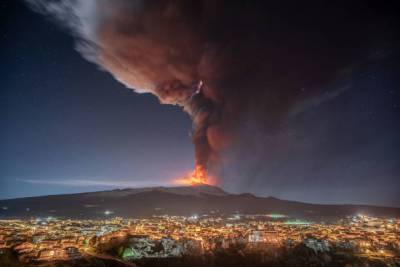 Mount Etna, Italy: one of the most active volcanoes in the world. For Boise State University geoscientist Jeffrey Johnson, this volcano's special "voice" is proving key to understanding the linguistics of volcanoes.

Johnson and collaborators studied inaudible infrasound at Mount Etna and identified an infrasonic signal from the volcano, the tune of which changed in the hours leading up to a kilometer-high lava fountain, lasting hours.

"We were listening to the volcanic conduit becoming shorter as magma was rising; this type of signal is called gliding," says Johnson. The U.S. National Science Foundation-supported researchers published their results in Scientific Reports. "It's exciting to see how fast volcanology is advancing as tools like infrasound are explored by this and other research teams," said Jennifer Wade, a program director in NSF's Division of Earth Sciences.

Johnson and the team are corroborating a hypothesis from previous work in Chile, where scientists speculated that rising magma in the conduit was responsible for rising frequencies.

"The exciting part is that we can apply this tool to other volcanoes in the hope we can forecast future big eruptions," Johnson said. "Volcano monitoring with infrasound is a growing field. Our lab at Boise State is capable of building scientific-grade infrasound sensors at very low cost and promoting this technology to a global network of collaborators."

Neo-expressionism: Jean-Michel Basquiat
7 thoughts by Franz Kafka that will make you think...

Researchers pull a record of 700,000 years of tropical climate change from an Andean lakebed